The Mycenaeans, also known to Homer as the Achaeans were the first people to inhabit Greece. Their civilization thrived from 1650 to 1200 BC when they experienced a catastrophic event that saw a massive migration and depopulation of Greece. They were known as the first people to speak the Greek language and inhabited the region of Peloponnese or southern Greece.

The Mycenaeans were influenced by the Minoan culture from their capital of Knossos on Crete. This influence is seen in the development of Mycenaean palaces, clothing, art, frescos and their writing system. Both the Minoans and the ancient Mycenaeans would become lost to the modern world for various reasons. The Mycenaeans also worshiped the same gods as the Greeks that came after them.< 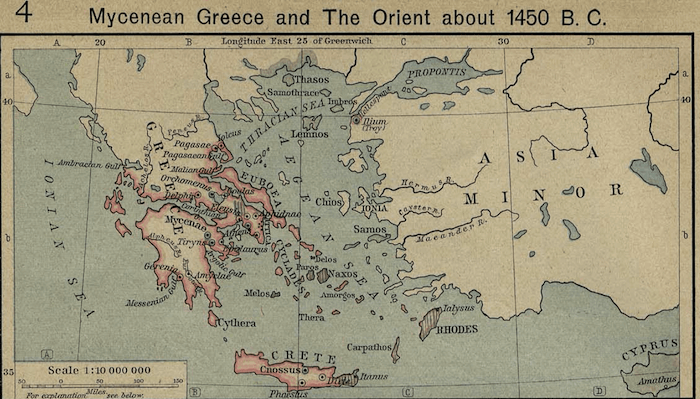 The Greeks that followed the Mycenaeans were impressed with what they had created during the Bronze Age. In fact it is from this period that the stories the Iliad and the Odyssey are born that tell of a mighty conflict known as the Trojan War occurred between Greece and the city-state of Troy.

It is noted during this time that the walls around most of the settlements are massive and made from blocks of stone weighing several tons. These blocks were quarried and carried to the mountain top settlements that would later be called citadels by the later Greeks. It was said in Greek mythology that only giants could have built walls of this magnitude and therefore called them cyclopean walls after Cyclops the one-eyed giant.

The early Mycenaeans were known to be aggressive in the ancient times, often attacking each other by sea and raiding the surrounding territories. Even from this period in Greek history the civilization was broken up into independent city-states, each with its own king.

Combat in early Greece was very unique. Battles in ancient Mycenaean Greece would be fought between champions of each city-state in one on one combat with each side bringing their warrior to the battle by chariot. This can be seen in the Iliad and the Odyssey many times, most notably in the battle between Achilles and Hector. The Mycenaeans were known for their bronze armor and weapons as well.

The civilization of early Greece is preserved through its stories and mythology. One famous example of early Greek culture was Homer's story of The Iliad. The story told of a Achaean Greek attack on the famous citadel of Troy located on the shores of the eastern Mediterranean Sea.

According to the epic poem, queen Helen of the Greek city-state Sparta ran off with the Trojan prince Paris and were chased by the Spartan king Agamemnon. The Greeks assembled a massive fleet and attempted to siege Troy and bring Helen home.

The city of Troy was a fortress and the siege went on for 10 years. Finally according to legend in a stroke of genius the Greek hero Odysseus the King of Ithaca came up with the brilliant strategy we know today as a Trojan Horse. It involved making a massive wooden horse monument that was to be left for the Trojans as a gift. The Greeks pulled back their fleet and appeared to retreat, leaving this massive wooden horse on the mainland.

The Trojans in bewilderment thought they had finally won the war and pulled the massive horse into their city and began hosting a massive celebration. If they had burnt the gift then the story would have been much different but instead in the dead of night Greek soldiers that had been hiding in the body of the horse burst out into the city and unlocked the gates.

Greek soldiers along with the hero Achilles and his soldiers poured into the city of Troy and the city was sacked and destroyed. The Greeks burnt the city to the ground for all their efforts and went back to Greece. However, some of the gods thought that Odysseus had cheated in his victory and made his journey home a perilous one that turned from weeks into a decade long voyage. The story of Odysseus's return voyage was detailed in the epic poem The Odyssey which would later become synonymous with a long voyage or journey.

This story was written during the period of the Bronze Age Collapse and is very accurate in terms of the general theme of the era.

Like the Minoans, the Mycenaeans were a civilization lost to the modern world. No evidence of the Mycenaeans (whom Homer called the Achaeans) or the city of Troy, also talked about in the Iliad, was to be found. However, in the 1800's, a German amateur archaeologist, by the name of Heinrich Schliemann, was convinced that the Trojans and Achaeans actually existed.He was fascinated by the Iliad; with his copy in hand, along with his wife, Schliemann set out to find ancient Troy. Based on a description in the Homer's Iliad, Schliemann found a hill in modern Turkey that fit this description of the location of Troy. Amazingly, as Schliemann dug, ancient Troy was revealed.Feeling he was on a roll, Schliemann then went to Greece, where he uncovered the lost city of Mycenae, high in the mountains. The Mycenaean palaces proved the wealth of the kings who ruled them. The Palaces included a large meeting hall, called a Megaron, and kings were buried in deep shaft graves along with their riches. Later tombs, called tholos, or beehive tombs, were built with massive stones and covered with earth.The major Mycenaean city-states included Mycenae, home of the legendary King Agamemnon from the Iliad, Tiryns, the home of Heracles (Hercules) from Greek mythology, and Pylos, the home of old King Nestor from the Iliad. Pylos, located close to the sea, was the only city-state that did not have cyclopean walls, therefore, it was not a citadel like Mycenae and Tyrins. Since Greece is mountainous, the best form of transportation is by the sea. The Mycenaeans were seafaring people, all of the city-states were close to the sea, but far enough way that, should the city be attacked, the inhabitants would have time to react.

Beginning around 1200 BC after the Bronze Age Collapse, Greece began to experience a dark ages that resulted in the loss of culture and constant warfare that led to widespread famine and instability in the region. During this period the Mycenaeans began to increase the size of their walls so this suggests conflict either internal or external.

The entire region of Greece and the eastern Mediterranean around where Troy was based experienced a period of great and total destruction that saw the permanent abandonment of many settlements. This period of chaos and warfare appears to have crippled civilization for several hundred years, collapsing the civilizations of both Greece and Egypt and sending Assyria into a period of stasis.

Multiple theories are given for the collapse of ancient Greece, mainly being an external invasion from the northern Dorian tribes that would later become Macedon and Thrace. Another suggests that there was increased fighting between the city-states over resources.

The idea that the Mycenaeans were invaded by tribes to the north is very easy to believe because it was known at this time the Dorians had iron weapons. This would have led them to have a great military advantage over the bronze based armies of the time. Many of the ancient Greek palaces were burnt and growing evidence suggests it was done by the people who replaced the Mycenaeans during the Greek Dark Ages.

In the wake of the invading Dorians, many Mycenaeans fled to other regions of the world especially Anatolia across the Aegean sea. However, one city on mainland Greece, Athens was able to survive this period of destruction and able to carry on Mycenaean traditions.

The Dorians had no written records so Greece fell into a Dark Ages in terms of literacy and there was no significant cultural development. This was also a time of anarchy, fear, confusion, chaos and violence that would last for around 400 years until the next round of Greek civilization would emerge from the ashes.